The Castle of Miramare and its Park were built by order of Ferdinand Maximilian of Hapsburg who decided to have a residence befitting his rank built on the outskirts of Trieste, facing the sea and surrounded by a large garden. Struck by the tough, untamed beauty of the promontory of Grignano – a sheer Karst outcrop, then almost devoid of vegetation – Maximilian purchased several plots of land at the end of 1855. The laying of the foundation stone took place on 1st March 1856.

On Christmas Eve, 1860, Maximilian and his wife, Charlotte of Belgium, took up residence on the ground floor of the building, which was already completed externally. Internally the first floor was still in preparation. Designed in 1856 by Carl Junker, an Austrian architect, the architectural structure of Miramare was finished in 1860.

The style reflects the artistic interests of the Archduke, who was acquainted with the architectural style of the time which was mainly eclectic: Gothic, Medieval and Renaissance models combine in a remarkable blend, recalling other examples of the great houses of the time, built by noblemen in Alpine landscapes on the banks of rivers and lakes.

In Miramare Castle, Maximilian creates a perfect combination of the sweet scent of the Mediterranean and the austerity of European form, recreating a unique atmosphere thanks to the presence of the sea, which gives the light-blue colours to the tapestry on the ground floor of the Castle, and inspires the names and furnishings of many of the rooms.

The craftsman Franz Hofmann and his son, Julius, were entrusted with the furnishing and decorations: the ground floor destined for the use of Maximilian and his wife, Charlotte of Belgium, has an intimate, family atmosphere, while the first floor was set aside for guests who couldn’t help being struck dumb by the sumptuous furnishings decorated with coats of arms and by the tapestry adorned with imperial symbols

The Park of Miramare, with a surface of 22 hectares, is the result of Maximilian’s long and demanding project on the rocky promontory of Grignano, which originally resembled a Karst area almost devoid of vegetation.

The site was planned and arranged by Carl Junker, though as far as the botanical features were concerned a gardener, Josef Laube, was called in. He was later Replaced, in 1859, by Anton Jelinek, a Bohemian who had taken part in the frigate 'Novara'’s expedition around the world.

Large quantities of soil were imported from Styria and Carinthia, and nurserymen, mostly from the Lombardy - Veneto region, obtained a rich variety of tree and shrub species, many from abroad. Maximilian constantly kept up with the work, which started in spring, and never stopped being interested in his garden even when he had moved to Mexico, whence he sent back numerous species of trees.

The dominant aspect of the area is “woodland”, in harmony with the orological features of the place: trees alternating with grassy spaces, winding paths, gazebos and ponds, recall the romantic principles of the English landscape garden. The south-west zone, protected from the wind, accommodates geometrically imposed areas, as in the case of the Italian-style garden in front of the “Kaffeehaus”, or of the well-arranged flowerbeds around the harbour.

The Park of Miramare, which in its purchaser’s intentions was to be an experimental centre for the reforestation and acclimatisation of rare botanic species, is a complex at once natural and artificial: in it one can, even today, breathe a meaningful atmosphere intimately linked to the life of Maximilian, and at the same time capture the relationship with nature characteristic of an age.

In the one should point out, in particular: the sculptures produced by the Berlin firm Moritz Geiss; the greenhouses, with glass partitions opening within the original iron framework; the “Swiss Cottage” which is on the edge of the swans’ pond; the small square with the cannons donated by Leopoldo l of Belgium; the Chapel of San Canciano with a wooden crucifix which, according to tradition, was carved from the wood of the warship Novara, dedicated in 1900 to Maximilian by his brother Ludovic-Viktor 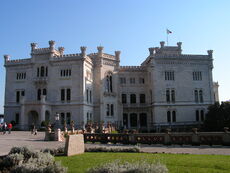 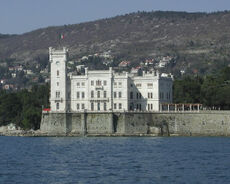 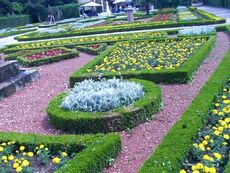