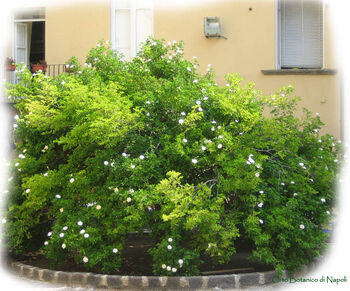 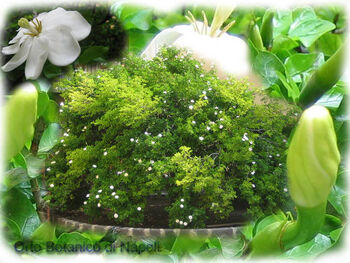 Gardenia thunbergia is a sturdy large shrub or small tree endemic to the Southern and Eastern regions of South Africa and neighbouring territories such as Swaziland. It grows largely in forest or on forest margins, occurring in the Eastern Cape, KwaZulu-Natal Province and Transkei in South Africa. It is densely twiggy and rigid with smooth light-grey bark, and is horticulturally valuable, being easy to grow as a strong hedge, but more usually as a specimen plant, striking in appearance and long-lived. The abundant and extremely fragrant flowers are about 70mm in diameter with long tubes only accessible to the proboscises of nocturnal hawkmoths. Some species The leaves are smooth, shiny, whorled and entire, and clustered at the ends of branchlets. The fruit is oval, hard, woody and fibrous, about 80mm long and about 40mm in diameter, light-grey with small raised white spots and if not eaten by large browsers or elephant, will remain on the tree for years. Its common names include Forest Gardenia, Mutarara (in the Shona language),. In Afrikaans it is variously known as Buffelsbol ("buffalo ball), Stompdoring ("blunt thorn"), or Wildekatjiepiering ("wild gardenia").

The tree is a food plant for the larvae of some species of hawk moths such as the Oriental Bee Hawk moth, Cephonodes hylas.

Gardenia thunbergia was first introduced to Kew as early as 1773. It belongs to the very large family of Rubiaceae, which includes plants such as coffee (Coffea arabica), quinine (Cinchona) and numerous ornamental trees and shrubs with showy flowers.

It is considered a means of repelling witchcraft in Karanga traditional medicine.